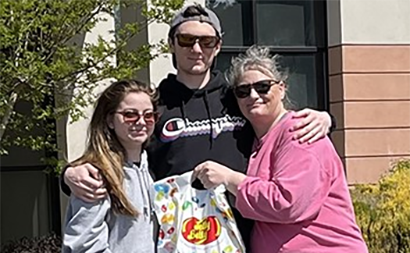 Through her Dream, Caroline Caldwell enjoyed some quality time with her son Austin and his girlfriend.

In 2014, a series of events turned the world upside down for Caroline Caldwell and her teenaged son, Austin. Her parents left their family home in New Hampshire to retire in California, and mother and son were living on their own for the first time.

And then came the life-changing diagnosis: Caldwell had stage 2 colon cancer.

The tumultuous time kept Austin from living the “normal” life of a teenager, according to Caldwell. As soon as Austin graduated from high school in 2016, they moved to California to be closer to her parents. But cost of living was prohibitively expensive, and when Caldwell moved in with her parents in Folsom as she underwent treatment, Austin moved back to New Hampshire.

The cancer fight brought mother and son even closer together, but now a continent was between them.

“My son is my strength, and it would mean the world to me if he could come visit me before I become too ill to enjoy time with him,” said Caldwell, who has been under the care of UC Davis Hospice.

Social worker Rebeckah Long referred Caldwell to Dream Foundation, the only national nonprofit that “serves terminally-ill adults and their families by providing end-of-life Dreams that offer inspiration, comfort, and closure.” Over her 15 years at UC Davis, Long has referred many hospice patients to the Dream Foundation to help fulfill their Dreams, including Jack O’Ryan.

“Working in Hospice, I know I cannot do anything to fix the heartbreakingly difficult things that my patients and their families are facing but, what I can do, is try to make things easier or better for them,” Long said. “Sometimes, that means connecting people to resources or helping them find joy and love during their most trying times. Working with the Dream Foundation to bring Caroline and Austin together was exactly that – joy and love.”

Dream Foundation provided Austin and his girlfriend with roundtrip air tickets to California, as well as funds for a special birthday dinner for Caldwell and some fun activities. They went to SeaQuest in Folsom, the Jelly Belly Factory in Fairfield, the Sacramento Zoo, and San Francisco’s Pier 39 – making cherished memories every step of the way.