After hearing her story, it’s hard to argue.

The Lincoln-Way East alumna and her parents, Sandy and Guy, celebrated her life and a couple of her favorite interests in January with an all-expenses-paid trip to Disney World and Universal Studios in Orlando, Florida, organized by Dream Foundation, a dream-granting organization dedicated to terminally ill adults. The vacation was the farthest the trio have traveled together in years.

Although the weather was more Midwest-soggy than Florida-sunny, the creature-loving Nicole navigated Animal Kingdom, Universal Studios, the Wizarding World of Harry Potter, the World of Avatar and SeaWorld with enthusiasm and a smile on her face. A positive attitude and spirit are Nicole’s defining characteristics, Sandy and Guy said.

“It is always so humbling watching her handle everything with such elegance and self-determination,” Sandy said in a phone interview the family conducted with The Mokena Messenger after their return from Florida. “She never takes no for an answer.”

Guy recalled a past trip Nicole took to visit her sister and meet some of her friends at Ball State University.

“Her friends said, ‘Hey, I thought your sister had cancer,’” Guy said. “They couldn’t believe it after meeting her.”

Nicole, one of three siblings, attended elementary and middle schools in Mokena before becoming a Griffin and then heading off to Northern Illinois University. She spent a semester in Bordeaux, France; interned at the Pritzker Military Museum & Library in downtown Chicago; and graduated with a history degree and minor in French.

History, traveling and exploration have always held a special place in Nicole’s heart.

“I just love history,” she said. “The different fields — everything,” she continued, describing an NIU course focused on Russia.

A project she worked on while interning at Pritzker involved interviewing war veterans and transcribing the notes.

“I got to listen to all these stories,” Nicole said with audible affection.

Nicole was diagnosed with cancer shortly after graduation. Her genuine care and interest in life and in others has never waned, said Sandy, a nurse at Advocate South Suburban Hospital.

Most of Nicole’s treatment has taken place at Northwestern Medicine Cancer Center in Warrenville.

“She’s like a celebrity there actually,” Sandy said, describing Nicole’s close relationships with nurses and physicians. “She cheers them up most of the time.”

It was at Northwestern where Nicole participated in a clinical research study involving a new approach to treating cancer. She is the longest survivor of those who have undergone the treatment, Guy said.

Over the years of treatment, the ups and the downs, family has stuck together the and continued traveling, taking trips to Springfield, South Dakota and other locales. January’s Florida getaway is certainly a memory they will cherish, the trio said.

“We haven’t had the opportunity to take her on a long trip like this in awhile,” Sandy said.

“I got to do everything I wanted to do,” Nicole said. “It was way too much fun.”

The family learned of Dream Foundation through one of Nicole’s caretakers, applied and found out they had been selected through a surprise Dream Delivery featuring sweets and a celebration of Nicole. Much of Dream Foundation’s work, including the deliveries, is carried out by volunteers. In this case, the delivery host happened to be a woman Sandy had gone to school with and had not seen in years.

“It’s such a small world,” Sandy said. “The kindness and charity of strangers, when you’re going through something like this — it’s just amazing.”

The Mikulich clan departed for Orlando Jan. 21, and spent five nights there. SeaWorld’s hundreds of penguins were a highlight for Nicole.

“They were the most beautiful things,” she said. “I was just sitting there for 10 minutes taking pictures
of them all.”

Universal Studios employees went out of their way to make the family’s experience special, Sandy said, and the family happened to cross paths with another Dream Foundation family while at the airport. The trip is one they will always cherish, the family said.

“If you met Nicole, you would never forget her,” Guy added. 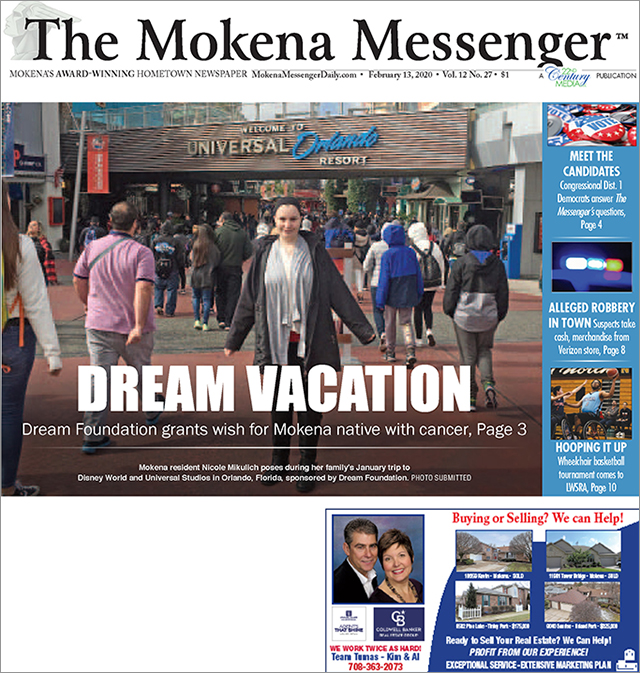