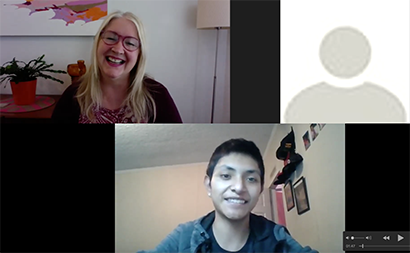 Nathaniel Zapata doesn’t think of himself as terminally ill. He’s just like any other 20 year old. He has hobbies, interests, friends and family.

His favorite past-time is drawing, and thanks to Dream Foundation, a Santa Barbara nonprofit, he can pursue his art however he wants.

Dream Foundation, the only organization that fulfills the dreams of terminally ill adults, turned his room into an art studio, complete with a drafting table, ergonomic chair and profession-quality art supplies.

Mr.  Zapata had only used standard pencils, nothing fancy, to sketch. So he was overjoyed at the nice supplies he received.

To add to the surprise, Dream Foundation invited Jane Callister, an art professor at UCSB, to teach him more about drawing.

It was his first real art lesson.

He had art class at school, but this was much better, Mr. Zapata told the News-Press.

He learned how to shade, blending the graphite to create depth in his art, and Ms. Callister taught him tricks to make his linework pop.

He sent her pictures of his latest work after the lesson, and she became amazed at the improvement.

She hangs his drawings in her room. She’s proud of her son’s creativity.

When they first learned about Dream Foundation, Ms. Madrano suggested the idea of an art studio to her son.

He said it wasn’t hard to ultimately choose the studio as his dream.

He’s not able to do much outside, so drawing is his recess. Art soothes his anxiety as well.

Art is also a connector for him. He gives his drawings to friends, people at church and family as well as posting pictures of his creations on social media.

Dream Foundation CEO Kisa Heyer sees hundreds of applications each year, and Mr. Zapata stood out not just for his young age but also his imagination.

“I looked at just the fact that he had such a creative dream; he really wanted to work on his artistic skills,” she told the News-Press. “We find that all of our dreams provide something for the applicant. But in his case, it’s really about inspiration. It was very powerful.”

The organization has served more than 32,000 people with dreams since its founding in 1994.

“I am continually amazed by just how these profoundly impact the individual but also their families and their community of caregivers and our communities. It’s such an honor to be able to do this work,” Ms. Heyer said.

Ms. Callister, in particular, was humbled by her experience.

“I hoped I’d given him something to inspire him,” the UCSB art professor told the News-Press. “I just felt so grateful to be able to help him; just learning his story was heartbreaking.”

She aims to stir joy with art. She once drew 120 pictures for her father to entertain him while he was ill.

“Something Dream Foundation really triggered in me is that I wanted to continue this work,” she said.

She is currently working on a project within UCLA’s Bedari Kindness Institute, hoping to bring joy to nursing homes through her work.