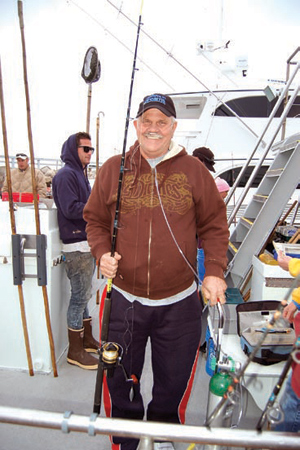 Written by barbara@dreamfoundation.org on March 15, 2012. Posted in In The Media

Ron Boyd heads out for his first and perhaps only deep-sea fishing trip aboard the Stardust on Tuesday.
SCOTT STEEPLETON/NEWS-PRESS

Ron Boyd heads out for his first and perhaps only deep-sea fishing trip aboard the Stardust on Tuesday.

Before heading out of Santa Barbara Harbor aboard the Stardust sport-fishing boat early Tuesday, the closest Ron Boyd got to the ocean was the water’s edge.

The Tonopah, Ariz., resident loves lake fishing and did that for years. Now he’s fished the deep sea – a first that may well be his last.

Mr. Boyd, 55, is in the advanced stage of chronic obstructive pulmonary disease and has about six months to live. He can’t work, is of limited means and recently moved in with a hospice caretaker.

Tuesday’s trip out of Sea Landing aboard Capt. Jason Diamond’s popular fishing vessel was, for Mr. Boyd, a wish fulfilled, all thanks to the Dream Foundation, which grants the wishes of adults suffering life-threatening illness.

Mr. Boyd is at the point in his illness where medicine can do no more. Like others with COPD, he suffers from chronic bronchitis and emphysema, the latter of which destroys the lungs.

“I was diagnosed three years ago last March,” Mr. Boyd told the News-Press as the Stardust prepared to head out on a six-hour trip. “It’s in the last stage; nothing left to be done.”

Cigarettes, he said, have definitely been a contributing factor.

As he speaks, Mr. Boyd clutches the handle of the oxygen tank that’s with him everywhere he goes. “If it wasn’t for this I wouldn’t be around right now.”

With the end near, Mr. Boyd came up with a “bucket list,” and right at the top was a fishing trip just like the one he was setting out on this cold, gray morning.

“My time’s getting close to the end of life, so one of my dreams has been to be able to go out deep-sea fishing.”

Hospice workers reached out to the Dream Foundation, which, through its various supporters, made it happen.

Before he got sick, the father of two adult children was on a lake all the time in Phoenix. “I know this is not the same,” he said with a smile that would light up a room. “I’ve never been deep-sea fishing. Never been on the ocean.”

“I’ve been to the edge and maybe looked out for half a day,” he added. “That’s as far as I’ve ever been.”

The fishing trip was actually one of several sea-theme activities that Mr. Boyd and his caretaker, Cathy Newport, have taken part in over the past few days. On Monday, they rode Santa Barbara Land and Sea Tours’ Land Shark around town, and today they plan to tour a halibut and abalone farm at the private Dos Pueblos Ranch, feasting on fresh seafood and avocados prepared on-site by chef Jason Banks.

Going on the ocean is one thing. But for many, keeping everything down once there is a different matter altogether. So, with six hours on the Pacific ahead of him, you couldn’t help but wonder whether landlubber Mr. Boyd was afraid of getting seasick.

“I’m hoping I don’t,” he said with a laugh. “But you know what? I’m not going to let it bother me. If I do I’ll throw up and keep going, whatever it takes.”

Ms. Newport was nothing but smiles as they prepared for the day at sea.

For Capt. Diamond, helping out those in need is second nature.

“I just think it’s great that he’s on his last leg and he wanted to go fishing, and he wanted to come here!” Capt. Diamond said. “It’s awesome. He’s going to have a great time. I’m so blessed that we can do this.”

As the crew untied the vessel and prepared the Stardust for launch, Mr. Boyd gave his rod the once over.

What was he hoping to catch?

“It does not matter,” he said. “Anything that’s edible. All the fish that I catch, I’ll take ’em back home.”

“If I go when I get back, most of my goals have been completed.”

Arriving back to the dock just after 3 p.m., Mr. Boyd marveled at the experience.

“That plus more,” he said. “Toward the end I started to get sick. Everybody on the boat was nice. When I got sick, they was there to help me.”

“There’s a lot of good people out there in this world.”

And how was the fishing?

“I got seven or eight fish,” he said, noting there was one parrot fish and the rest were red snapper.

“My time is short, but I got plenty to nibble on until that time comes.”