Written by barbara@dreamfoundation.org on December 10, 2015. Posted in In The Media

A joyous, memorable Christmas surrounded by the people she loves. That’s what Gina Jones wanted when she contacted the Dream Foundation in November, 2015.

Weeks later, a knock on the door brought Gina and her grandchildren presents, decorations, and food galore, not to mention a merry band of elves.

While the Dream Foundation has made over 23,000 dreams come true, and never turned down a qualified request, their swift response was still a shock to Gina. “My initial call to Gina was emotional,” recalls Katarina Robledo, the dream coordinator who managed Gina’s case. “She was absolutely overjoyed with us wanting to grant a dream for her, she couldn’t believe that her application had been accepted. 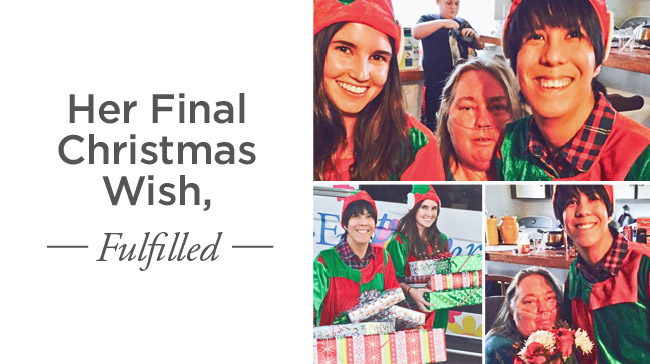 “She said she finally felt like someone was on her side and she had God watching out for her and her family.”

Gina, 50, suffers from chronic obstructive pulmonary disease, or COPD, a condition which affects over 24 million people in the United States alone. It is the third leading cause of death in the United States, and women are disproportionately affected. Most cases are caused by smoking, but genetics, air pollution, and infections can also play a role in causing COPD.

Gina was diagnosed in 2014 and is currently at stage 4, the most severe grade for COPD. Most people with stage 4 COPD suffer with extreme shortness of breath and are often unable to even leave the house.

For what will likely be her last Christmas, Gina wanted to give her grandchildren — Christina and Matthew, both of whom she adopted — a truly memorable day, filled with presents and holiday cheer. She also needed some help paying off some expenses, including loans, household bills, and a Rent-A-Center bill.

Dream coordinator Maeve Harding was among the five person team who brought Gina’s dream to life. “This was an emergency dream, so we had to try to get everything turned around pretty quickly,” she says. Trekking an hour in a van stocked with donated presents, as well as decorations and food, they arrived at Gina’s home in Santa Maria, California dressed as some of Santa’s elves. (Read more…)