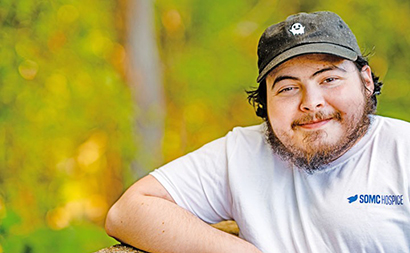 MEGAN ALLEN, STUDIO 22 PHOTOGRAPHY
“I wanted to publish a story that acknowledges emotional and physical ailments as a way of teaching kids and others that it’s normal not to feel ‘normal’,” said Kameron Shepherd, author “Barry’s Wake Through the Forest.”

When 21-year-old Kameron Shepherd from Portsmouth, Ohio, was given a terminal diagnosis, he contacted the Santa Barbara-based Dream Foundation with an unusual request.

He wanted to use whatever time he had left to write, illustrate and publish his own book.

Not just any book.

He wanted to give people like him a voice.

He has been living with Ewing’s Sarcoma, a rare bone cancer, since the age of 2. He grew up looking and feeling different.

“The kids I met weren’t always kind. I struggled with the sense of isolation and insecurity that brought,” he told the News-Press during a phone interview from Portsmouth. “I found solace exploring in the woods. I began drawing and writing as a creative escape and as a way of expressing my feelings.”

When he learned that he was facing the end of life, Mr. Shepherd wrote to the Dream Foundation, the adult dream-granting organization, with help from his social worker Julie Fenton of the Southern Ohio Medical Center.

“I wanted to publish a story that acknowledges emotional and physical ailments as a way of teaching kids and others that it’s normal not to feel ‘normal’,” said Mr. Shepherd, who graduated from Middle Park High School in Granby, Colo., and attended Metropolitan State University of Denver in Colorado.

During the phone interview, he described the book’s message: “ ‘Barry’s Wake’ is the story of a swamp monster that is antagonized by these little faces who coordinate visually to his emotions. They whisper to him and sometimes guide him to slowly understanding their existence.

“An example of their presence and what they do is when Barry stumbles upon a tree with a carving of two letters. The faces begin to get riled up, and when Barry goes to touch this carving, he passes out and is shown a flashback.

“When he awakes, the faces tell him the feeling, and in this case, the feeling is love. Barry goes around this forest/swamp discovering things left behind by other people, and all the items are tied to a feeling and a flashback. Slowly, at the end, a force asks him about the experiences he saw and questions whether he is truly able to feel and understand what he saw and felt.

“He stands up to this force and tells it that although the stories are not his, he can now understand these feelings and what they truly are. At the end, we cut to a scene where Barry is stepping out of the forest barefooted, shedding the monster-like appearance he had and coming back into the world.”

“He just wanted to see his story in print, but we thought we could do better than that,” she said. 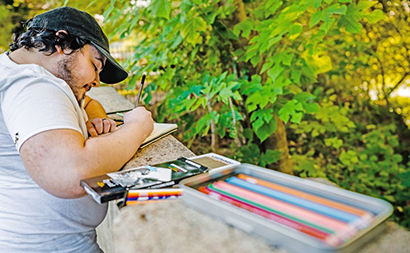 With their coaching, the 65-page soft cover book, “Barry’s Wake Through the Forest,” (Bar Nothing Books, $12) became a reality.

What began as a mentoring relationship developed into a strong bond.

“Kameron’s creativity, his enthusiasm and his gratitude for simple kindnesses are all such beautiful qualities,” said Ms. Graham. “I loved watching him take small nuggets of advice and apply them in a thoroughly original way. He’s living his life, and he wrote the book on his terms, and that’s remarkable.”

Said the budding author, “When I first made Barry, he was just a simple sketch on my phone. Ruth and Nancy loved him from the get-go. Nancy made me feel more confident than ever when it came to my artwork. I was embarrassed by it, but she loved it and was always rooting for more.

“Working on Barry and turning him into a book is something I never would’ve imagined if it wasn’t for the support of great friends I made at the Dream Foundation.”

“Barry’s Wake Through the Forest” by Kameron Shepherd is available for $12 at www.amazon.com and www.barnothingbooks.com. 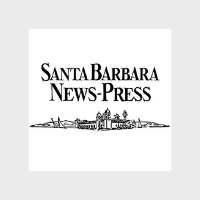